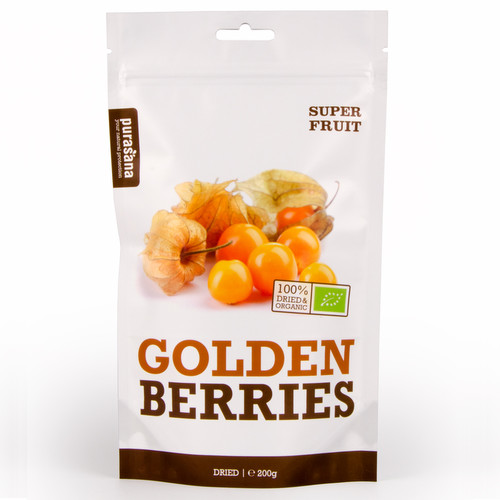 Purasana Golden berries are most commonly known as Cape gooseberries. They have an exotic slightly acidic, sweet and fresh fruity taste, which intensifies the flavors of other fruits in smoothies and fruit salads. These berries can be eaten as they are or added to cereals, fruit salads, yogurts, milkshakes, ice cream, desserts and various dishes, sweet or salty and form a good complement for people with physically demanding activities.
Cape gooseberries are the fruits of a species of the genus Physalis native to South America (Colombia, Chile, Peru). The dried fruit is orange and is marketed in the United States most commonly as goldenberry and sometimes Pichuberry. In Britain, the fresh fruit is usually sold as Physalis and the dried fruit as goldenberry. But in fact this berry has latin name latin name Physalis peruviana and is actually not a gooseberry (latin name Ribes grossularia).

Keep in a cool and dry place, tightly close the bag after use.