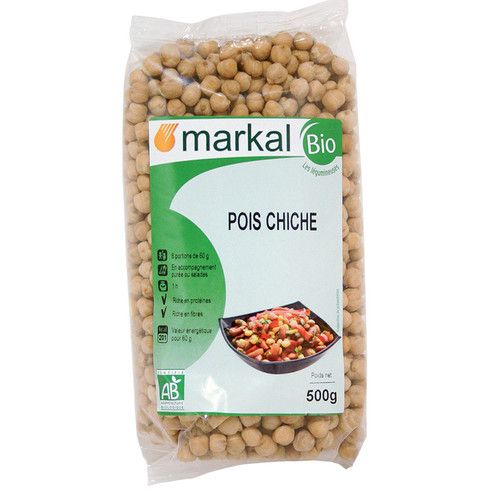 Chickpeas, seeds of a leguminous vegetable, have been consumed for centuries in many traditional dishes and are nowadays appreciated for their protein and fibre content and for their multiple health properties.
Chickpeas are one of the main ingredients in hummus and falafel, traditional dishes from the Middle East, and are also traditionally used in couscous dishes but offer many flavours in various preparations: hot as an accompaniment to vegetables or meat, as sauce or as velvety soup, cold in salads or mixed as bread spreads or desserts (mashed chickpeas with Fruits secs for example). Presoaking and soft cooking, grinding into soup or puree make chickpeas more digestible

Allergen prevention measures implemented by the company MARKAL:
* the packaging schedule is defined based on allergens
* complete cleaning after each product
* additional cleaning at the end of workingshifts by a specialized company