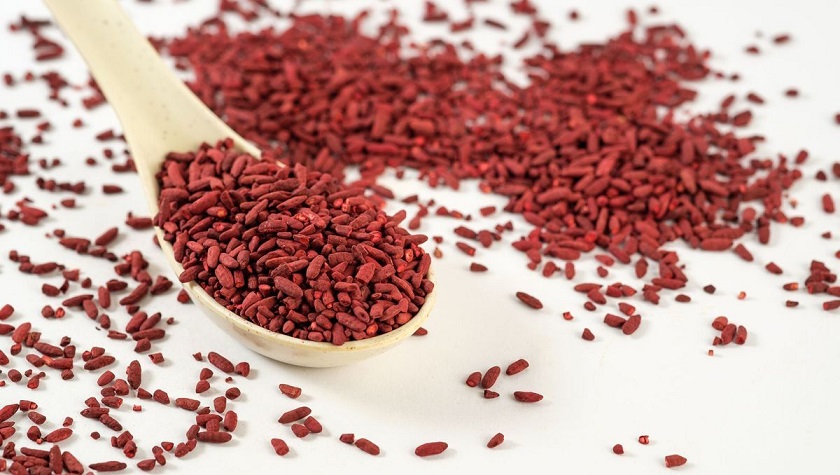 Sales of this product is forbidden in Switzerland.

The extract of red yeast rice contains monacolins which have a chemical structure very similar to that of statins (cholesterol-lowering medication), enzyme inhibitors of cholesterol biosynthesis. It includes also monacolin K, a natural equivalent of lovastatin (statin commonly prescribed but with well known side effects on muscles), but in very small quantity. This suggests that the cholesterol-lowering effect from the extract would be due to other substances than monacolin K alone and this explains the fact that patients who suffered side effects when taking lovastatine had none with the extract of red yeast rice.
In Asia, red yeast rice has been for centuries mainly a food product: dried and powdered, it is used as a colouring and flavouring agent in various food preparations. But already in 800 BC, this yeast was deemed to facilitate the circulation of blood.

Red yeast rice is a speciality of Asian origin, developed by fermenting (white) rice with a microscopic fungus. This micro-organism, a fungus called Monascus purpureus, produces a characteristic red pigment, hence the name of red yeast rice. GPH diffusion gave its red yeast rice the trade name "Red Yeast Rice Extract" but it contains the full result of the fungus fermentation.
A longer fermentation time allows to obtain a higher concentration of monacolin K, the concentration of 1.6% is verified by analysis. The final product is also analysed to verify the absence of micro-toxins.

- 1 capsule per day with a full glass of water during meals and as part of a balanced diet.