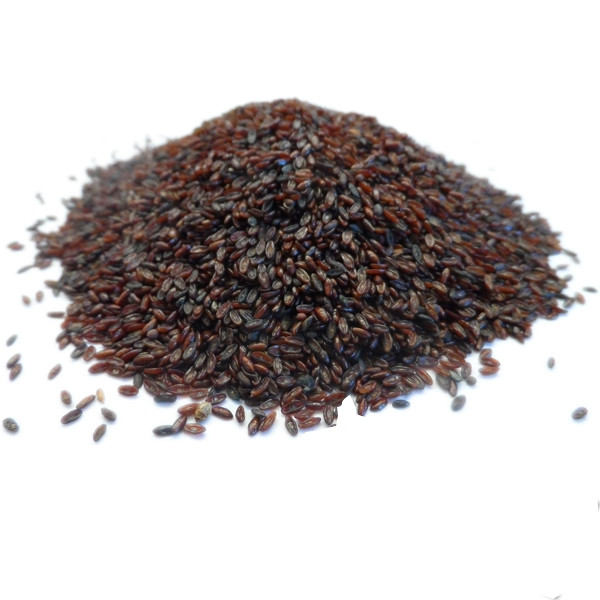 Psyllium (or Desert Indianwheat, Ispaghula, Isabgol...), in this case black psyllium, rich in non-aggressive and effective soluble (35%) and insoluble (65%) fibres, has been approved as a remedy against high cholesterol, constipation, irritable bowel syndrome and diarrhea and as having a contribution to risk reduction of cardiovascular diseases.
The Psyllium (Psylli flavum Testa) husks - organic seeds are not absorbed by the body and their structuring and forming effect on the stool is purely mechanical. Their soluble fibres are part of the prebiotics. These can play an important role in the prevention and treatment of inflammatory diseases of the intestine by acting on the intestinal bacterial flora to restore a healthy intestinal balance.
Psyllium seeds and seedhusks are well tolerated, have no bad adverse effects and no inconvenience to a permanent throughout life is known. Their (very soft) action can take some days to appear. According to experts the medicinal properties of psyllium are due to its mucilage (soluble fibres that form gels in contact with water) and most psylliums, black or white, are rich in mucilage.
These psylliumseeds are mature seeds of a black psylliumsort. they have a neutral odour and taste.
Also very rich in fibres: dried figs , plums , psyllium , Golden linseed - organic , chiaseeds , coconut meal , tigernut flour , cocoa beans or cocoa powder ,....

- Psyllium husks or seeds soften the consistency of stool and thus facilitate its passage.
- They do not attack the intestinal mucosa but act lubricating.
- Their laxative action is mecanical (ballast of the husks) without assimilation of the husks by the body.
- In case of constipation or diarrhea psyllium husks or seeds give stool the optimum, soft and malleable, consistency and restore normal function of the colon.
- For Irritable Bowel psyllium husks or seeds do not seem to directly relieve the pain associated with this syndrome, but they improve and regulate effectively the digestive functions of the patients.
- In chronic fungal intestinal infections, candidosis ... psyllium husks or seeds absorb the produced toxins (these can cause allergic reactions), soothe inflamed tissues and promote the development of beneficial bacteria in the colon.
- Psyllium husks or seeds lower the glycemic index of a meal by changing the structure, texture and viscosity of food in the intestine.
- They lower the total and LDL cholesterol, risks of cardiovascular disease.
- They generate a feeling of fullness which can help reduce food intake and consequently improve weight control.
- By their muliple actions they contribute to reduce risks of cardiovascular disease.

- Untransformed psyllium seeds have to soak a few hours in lukewarm water before consumption. When taken as Psyllium (Psylli flavum Testa) husks - organic or powder, you just have to mix them with water or juice and drink the thickened mixture after a few minutes.
Although there is no recommended dosage recognized, generally for an adult as dietary supplement a daily dose of 2.5 to 8 g husks or 4 to 13g seeds are advised. For a therapeutic dosage aiming medical ailments maximum doses of 13g husks or 8g seeds and remaining under a total of 30g husks and 40g seeds a day are advised.
- Psyllium seeds are also used in cooking eg sprinkled on pastries. Do not forget to drink enough depending on the quantity of seeds ingested

- Store in a cool and dry place away from light, in a closed packing.
- Possible side effects: bloating, flatulence and cramps. These annoyances are limited by integrating the seeds or husks gradually in the diet.
- Above all think to drink enough (pro psylliumspoon 1/4 l liquid) : if the amount of water ingested with psyllium seeds or husks is insufficient, there is a risk of obstruction of the digestive tract by a compact mass of stool is to be feared.
- A simultaneous intake of fibres and medicines may reduce the absorption of the latter, so observe a delay of minimum 3 hours between both.
- For diabetics: Psyllium slows the absorption of carbohydrates, which will affect insulin levels. So take psyllium only under control.
- Psyllium should not be taken in case of intestinal obstruction, difficulty of swallowing, acute inflammation or narrowing in the digestive tract.