The ignored beneficial effects of cherries

The cherry belongs to the same family of fruits as the peach, the plum, the apricot, or the almond. Tart or sour cherries are used for culinary preparations such as desserts or garnishes, while sweet varieties are eaten more as fruit.

What is often ignored is that this fruit offers real health benefits due to its richness in antioxidants.

The anthocyanins and cyanidins in cherries have been shown to be more potent than vitamin E in their antioxidant effects.

Sweet cherries also contain a small amount of quercetin, which is one of the most powerful active ingredients often used in food supplements.

Cherries contain fiber, vitamin C, carotenoids and anthocyanins that play a real preventive role in cancer processes. This was revealed in a study that used anthocyanins extracted from cherries on human cancer cell cultures. These substances promote apoptosis (the process of natural death of cancer cells) and prevent healthy cells from mutating into

In a study of more than 600 gout sufferers, researchers found that people who ate about 15 cherries a day had a 35% lower risk of recurrence. And those who ate 3 healthy servings in two days saw this risk reduced by almost 50%. 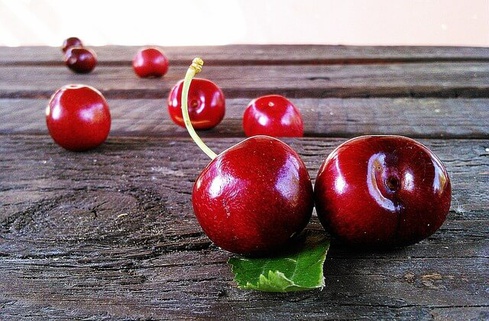 Gout attacks occur when blood levels of uric acid are too high because of a deficiency in the metabolic processes that control its amount.

Stiffness and swelling appear as a result of the accumulation of uric acid crystals in the joints. The pain and inflammatory reaction is caused by the body trying to eliminate these crystals.

In the event of an attack, eating 2 large portions of cherries quickly reduces uric acid levels by 15% as well as levels of C-reactive protein (CRP), the blood parameters and markers that are associated with inflammatory diseases such as gout.

Because of these powerful anti-inflammatory effects, cherries are of course also effective in other inflammatory phenomena such as pain caused by arthritis or

According to one study, women with osteoarthritis who drank cherry juice twice a day for three weeks showed significant reductions in their inflammatory markers. They also reported a 20% reduction in pain. According to some researchers, tart cherries have a very high "anti-inflammatory content" compared to many other foods.

It is known that abdominal fat is also the result of inflammatory phenomena and that the development of this fat is really harmful to health and favorable to the heart problem. In a study conducted on rats fed with tart cherry powder, researchers found that they showed a marked reduction in fat storage compared to other rats that did not consume this cherry extract. The first group of rats also had lower blood levels of inflammatory factors and triglycerides, triglycerides that are a real danger to our heart health as well as circulation. 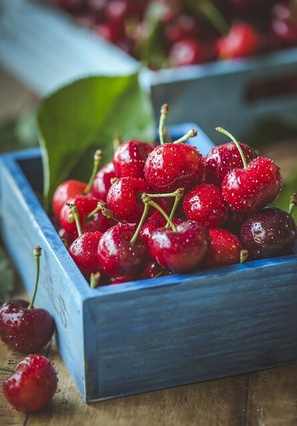 Athletes who consumed cherry juice on a daily basis before their long-distance races
reported reduced muscle soreness after exercise.

This suggests that cherries may have a reducing and protective effect on muscle damage and pain during intense exercise.

Because of their great power antioxidant and their tendency to regulate the genes involved in glucose metabolism, tart cherries would actually significantly reduce the risk of heart disease andobesity.

Another piece of good news for people with sleep disorders is that cherries contain natural melatonin. This molecule is a powerful antioxidant radical scavenger that reduces oxidative stress and also reduces inflammatory phenomena.

But this natural melatonin also plays a vital role in sleep and regeneration of the body. It is on the basis of the rate of light or darkness that the pineal gland secretes melatonin which helps us sleep. Researchers claim that this exogenous melatonin intake would not only improve melatonin levels, but also increase sleep time and quality.

So, eat cherries and you will have benefits on your health in an overall way.