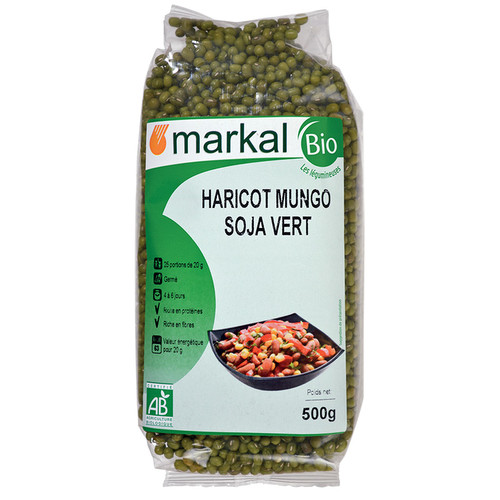 Mung beans or green soy beans, as the Azuki Beans, loose food - organic ), are easier to digest than many other leguminous. They are sweet and soft, dark green outside, dark yellow inside, and may be sprouted or used peeled or whole, split or ground in lots of culinary preparations. Mung beans are "proteaginous" seeds which are consumed for their protein content but also for their multiple health properties. In addition to the properties of Légumineuses (rich in minerals, proteins, vitamins, fibres) mungo beans are known to have strengthening and anti-fatigue properties.
Mung beans may be used in a variety of ways, including making noodles although the most popular use of mung beans in the western world is for sprouting. Interestingly, the sprouts contain vitamin C that is not found in the bean. Sprouting is an easy and convenient way to provide fresh salad ingredients on demand. The sprouts are used when they are about 2 to 5 cm long, raw or cooked.
Mung beans (also known as moong bean, katjan indju, green gram or golden gram) and Azuki Beans, loose food - organic are some of many species recently moved from the genus Phaseolus to Vigna, and are still often seen incorrectly cited as Phaseolus aureus, Phaseolus radiatus or Phaesolus angularis.