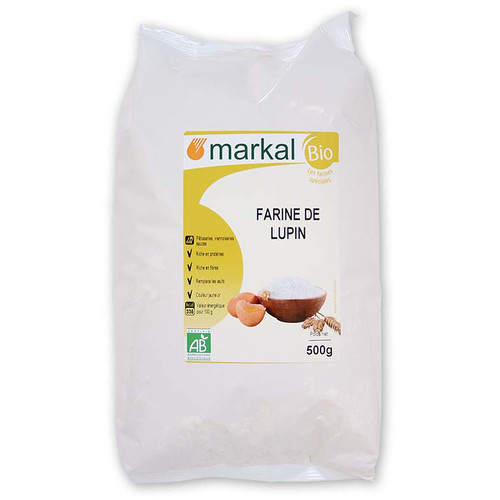 Win 45 beez by buying this product

Lupin is a leguminous plant that has very interesting levels of proteins (higher than those of cultivated protein plants, even soy: 40% for lupin beans against 30% for soybeans), fibers, tocopherol (antioxidant) and essential fatty acids. Markal lupine flour is obtained from seeds of sweet white lupine (Lupinus albus) and is a yellow flour with specific odour and taste which can be used for delicious velvety soups or sauces, or incorporated into puddings, pastries (almond cream, yellow pasta, ...), bread (special breads, toasts, ...), biscuits... Combined with other flours, it can partially replace eggs or butter in baking. Lupine flour can also be used to make delicious velvety soups or sauces by diluting it in water or vegetable bouillon and adding to it eg oatmeal or sweet vegetables (carrots and onions) or some fragrant mushrooms (maitake, blazei, trumpets, shiitake ...).
White lupine has always been used as food but also as a medicinal plant , especially against skin problems. Its flour is used for its resolutive, emollient and calming properties and treats, as a poultice, abscesses and boils. Formerly it was also a remedy to relieve rheumatic pains and lung colds. At the present time a Spanish-Italian study has highlighted the anti-diabetic potential of a glycoprotein, also found in lupine seeds.
There are many varieties of lupine but most of them have seeds containing 1-2% bitter alkaloids, which are toxic, and thus these seeds require treatment to make them safe for consumption. Sweet white lupine seeds however are free of alkaloids and are therefore ideal for consumption. Unfortunately white lupine yield per hectare is low (22 quintals per hectare against 80 or 100 for other varieties) and this affects the price of the beans.

Have a look at Antya blog : Lupin Recipies for Low Carb Healthy Eating