An asparagus extract may increase liver enzyme function and boost alcohol metabolism, according to a new Korean study.

The results published in the Journal of Nutritional Science indicate that these extracts could be obtained by using the parts of the asparagus that are usually discarded by processors and growers, such as the leaves, which are in fact a cheap source of bioactives.

"These results provide biochemical evidence of the method with which Asparagus Officinalis
exerts its biological functions, including hangover relief and protection of liver cells
from toxic actions," the Jeju National University researchers write in their report.

Extracts of young shoots and leaves of asparagus were tested to see if they could reduce toxicity in human liver cells exposed to hydrogen peroxide (an oxidant).

The "hangover" is, in fact, a direct result of alcohol's toxicity on the body.

According to the study data, the nutritional content, i.e., amino acids and non-organic minerals, was greater in the leaves than in the shoots.

In addition, cell toxicity from hydrogen peroxide and ethanol (alcohol) "was significantly decreased by leaf and shoot extracts of A. Officinalis," the researchers said.

The impact of asparagus extracts on two key enzymes that metabolize alcohol (ethanol) was also studied.
The enzymatic activity of alcohol dehydrogenase (ADH) and aldehyde dehydrogenase (ALDH) was up-regulated and increased twofold in response to leaf and shoot extracts.

Excess ethanol generates DRO (reactive oxygen derivatives = oxidants), and it is mainly eliminated by alcohol dehydrogenase (ADH), which is the principle of protection of cells against oxidative stress.

Let's remember that oxidative stress is involved in the physiopathology of many human diseases (cancers, cardiovascular diseases, neurodegenerative diseases.). Similarly, oxidative stress could represent a key pathogenic factor in the occurrence of alcohol-related liver damage. 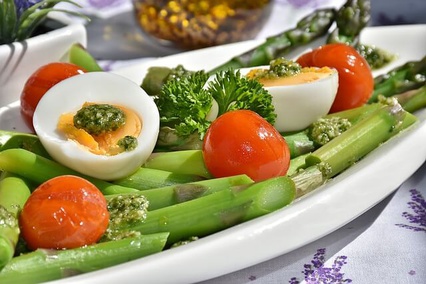 These results suggest that Asparagus officinalis exerts a broad spectrum of activities including strong antioxidant activity and the ability to act as a potential catalytic factor in stimulating the enzymatic activities necessary to metabolize ethanol.
Asparagus leaves, which are usually discarded and discarded, therefore have great potential for use in therapies for the liver and its associated disorders.

Asparagus is a popular vegetable in Europe and the USA. The most productive countries are China, Peru, the USA, Germany and Spain. The latter produced 50,000 tons of both variants (white and green) in 2005.

This is not the first time that asparagus draws attention to its properties, the most well-known of which is that it is diuretic, probably because it has a high potassium content, and contains fructosans (complex sugars) ains asparagine. It is also very low in calories.

To add to your garden! Asparagus can occupy the same place in the garden for a long time, for a period of 15 to 20 years...