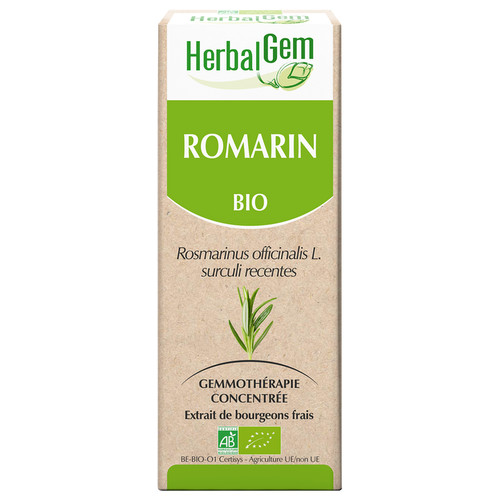 It is at the blood and hepatic level that rosemary has its main activity.
Great hepatic drainer and hepatoprotectiv remedy, rosemary works in hepatic insufficiencies, vesicular lithiases and biliary dyskinesias. It is both cholagogue and choleretic. The glycerine macerate of young shoots of rosemary is a general detoxicant of the body, it lowers triglycerides, urea, uric acid, cholesterol and restores the mineral and ionic balance. At the blood level, it normalises the sedimentation rate, traps free radicals (anti-oxidant) and increases red blood cells. It is recommended to stimulate the circulation of the extremities (cold hands and feet) and fights against atherosclerosis.
At urogenital level, rosemary - of a Yang nature - is a tonic working in adrenal insufficiency and functional sexual abnormalities (frigidity, impotence). It fights against gonadal senescence, congestion of the prostate and dysmenorrhea.

The above information is a translation of the FEH with its authorisation.

The glycerine macerate of rosemary is made with young leafy non-woody shoots. They are always non-floral shoots.

Rosemary is well known in herbal medicine and is used in several galenical forms: mother tincture, essential oil, herbal tea, fluid extract, ... The works of Fleurentin, Pelt and Alii show that the young shoots in the form of glycerine macerate have a much higher hepatoprotective activity (63%) than the whole plant (6%). It is the same for the biliary flow, the measurement of which shows a choleretic activity 2 times and half more important for the young shoot compared to the whole plant.
Glycerine macerate from rosemary also has a free radical scavenging activity greater than that of the whole plant. Presumably - but it must be confirmed experimentally - other glycerine macerates also have such antioxidant properties, including those from blackcurrant and poplar buds.
The traditional indications of Rosmarinus officinalis have been confirmed in vivo in rats with a superiority of action of young shoots compared to the whole plant.

Normally your therapist will give you the dosage corresponding to your precise problem.

Standard use and dosages for adults):