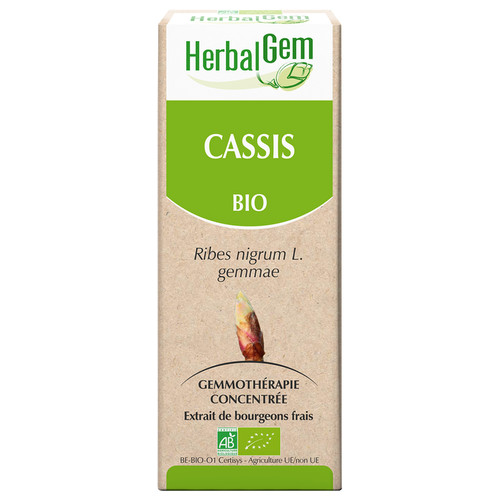 Already recommended by the abbot of Montaran in 1712 under the name "elixir of life", blackcurrant was considered as a true panacea because it was told to support human longevity. It is the bud to take to help in all cases of varied pathology. It is adaptogen, meaning it has a normalizing action, both physical and mental, independent of the direction of the disease. It can be given safely over a long period.
Recommended in the 18th century as an "Elixir of Life", Blackcurrant bud is one of the most widely applicable of the extracts known in gemmotherapy. A very effective and potent tonic, it has been shown to have a salutary effect throughout the human body. It also acts as an "adaptogen", enhancing the effect of other plants with which it may be associated.
Blackcurrant bud is a true "natural concentrate", effective against allergies (effect comparable to cortisone), migraines of allergic origin, urticaria, hay fever, diseases of the liver.
Blackcurrant bud macerate is at the first place an antirheumatic and a powerful anti-inflammatory. Remedy of arthrosis, gout, ligaments and tendons pains, painful joints.
It is a stimulant of suprarenal glands, kidneys, pancreas, liver.
It acts effectively at respiratory level in asthma, chronic bronchitis, emphysema, allergic rhinitis.
Particularly recommended to tired people, lacking enthusiasm, it stimulates the endocrine glands and combats drowsiness.
Remedy for the prostate, osteoporosis, gastritis, lack of appetite (one produces with fruits and buds a Blackcurrant cream that is used in several aperitifs among which kir).
It is a tonicum, recommended in hypotension. The blackcurrant macerate is indicated in any acute or chronic pathology. It also acts efficiently by internal way against the after effects of insect bites (anaphylactic shock). A few drops applied to the bite will reduce the sensation of pain.

The above information is a translation of the FEH with its authorisation.

Based on fresh buds.

- Reduces the side effects of drugs (medicine).
- Can be effective preventive and curative in influenza.
- Amplifies the effects of chemotherapy while protecting from side effects (10 drops 2 to 3x/jour).

The HerbalGem/GemmoBase products are concentrated and 50 ml allow for a 70 days cure based on 10 drops per day.

- Take the drops 1/2h before meals, 2 to 3 times per day, pure or diluted in source water or honey. For an optimum result, put them directly on the tongue and wait for a few seconds before swallowing.
- Gradually increase the dosage (1 drop per day from 5 drops) to 15 - 20 drops. After having obtained the desired result, keep the same number of drops until the end of the cure.
- One generally recommends a 3 weeks cure, repeated 3 times, with a week of downtime between each cure.
- Correct dosage to be confirmed by your therapist.

- Keep away from children.
- No specific contra-indication.
- The pregnant lady will take care not to use buds with hormonal action like raspberry, bilberry, giant redwood (or sequoia), oak.